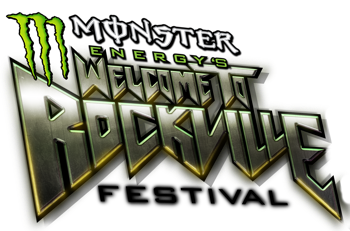 Monster Energy's Welcome To Rockville triumphantly returns to Jacksonville, Florida's scenic Metropolitan Park along the St. Johns River April 26 and 27, bigger and better than ever. Following 2013's third annual event which drew over 25,000 people and garnered widespread media acclaim, the two-day destination music festival anchors the World's Loudest Weekend and will feature a massive all-star rock lineup featuring co-headliners Avenged Sevenfold, The Cult, Rob Zombie, Korn, Five Finger Death Punch and Staind. The initial daily band lineup for Monster Energy's Welcome To Rockville is as follows, with more to be announced: Korn's Jonathan Davis says, "Can't wait for Rockville! We love coming to JAX — the fans there always bring it!" "5FDP is incredibly excited to be part of the kickoff of the World's Loudest Month," says Five Finger Death Punch's Jeremy Spencer. "We are blessed to have so many fans in Florida that made it possible for the band to step up as a festival headliner standing beside giants like Korn and Rob Zombie! Thank you, Florida. See you all soon!" 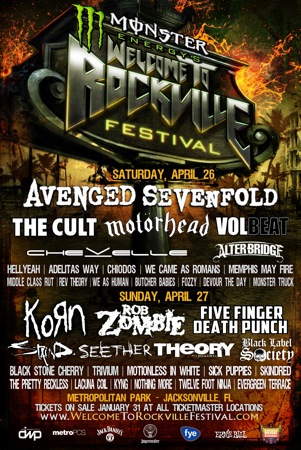 A special discounted ticket pre-sale for Monster Energy's Welcome To Rockville will be held from January 28-30. During the pre-sale, a limited number of discounted 2-day weekend General Admission and VIP tickets will be available for purchase. Weekend General Admission ticket pre-sale prices are as follows (plus fees): To obtain a password to access the ticket pre-sale for Monster Energy's Welcome To Rockville, visit www.WelcomeToRockvilleFestival.com,www.FolioWeekly.com, www.RevolverMag.com, or listen to your local rock radio station. A limited number of pre-sale tickets will also be available at select Metro PCS locations with no service fees. Regularly priced weekend and single day tickets for Monster Energy's Welcome To Rockville go on sale Friday, January 31 at 10:00 AM ET atwww.WelcomeToRockvilleFestival.com, all Ticketmaster outlets and select Jacksonville Metro PCS locations. A limited number of two-day VIP tickets and hotel packages will also be available. Two-day General Admission tickets will start at just $99.50 plus service fees, and single day General Admission tickets will start at $59.50 plus service fees, with GA and VIP ticket prices increasing on February 3. While supplies last, discounted weekly GA tickets will be available to military for just $69 via www.govx.com. In addition, select Metro PCS locations will be selling tickets with no service fees. For full details, visit: www.WelcomeToRockvilleFestival.com. "I have a long term plan to make Jacksonville a destination music city. That plan starts with showcasing Met Park to the world. There were people who wanted to ban music from the Park, and there was no way I was going to let that happen. We fought to keep rock alive and are excited to be returning to Metropolitan Park for the fourth year in a row," says Monster Energy's Welcome To Rockville producer Danny Wimmer. "This year's lineup is stronger than ever. Monster Energy's Welcome To Rockville has become a top destination music festival that draws people from around the country to downtown Jacksonville and the surrounding areas." 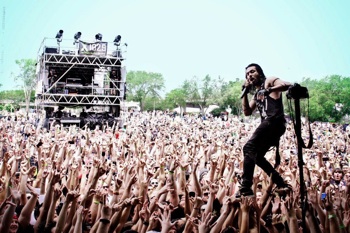