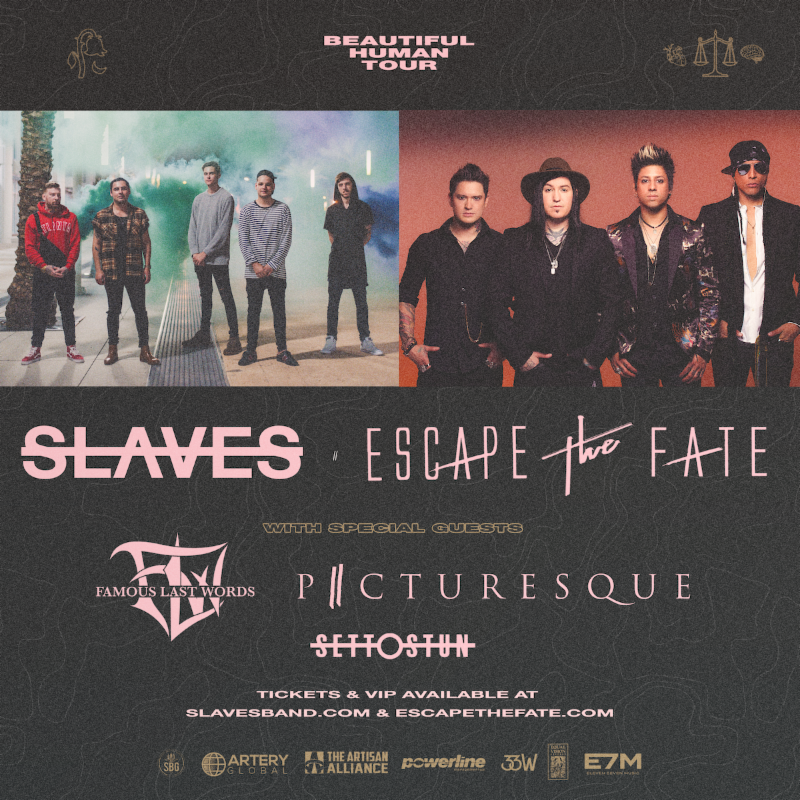 OCT 3RD | SOUNDBAR | ORLANDO, FL
Lexington, KY – Alternative band Picturesque has announced that they will be joining Slaves and Escape The Fate this fall for the “Beautiful Human Tour.” The run kicks off in Pomona on September 7th and wraps up in San Diego on October 14th. For a full list of dates, please see below or visit www.picturesqueband.com.
Picturesque recently released “Dead Flowers,” the band’s first new song since 2017’s debut full-length, Back To Beautiful. It was recorded over the course of three months in various studios in California, Michigan, and the band’s home state of Kentucky, with mixing and mastering done by Erik Ron and Chris Athens. The video was directed by Daniel Wand (Capsize).
Picturesque is Kyle Hollis (vocals), Zach Williamson (guitar), Dylan Forrester (guitar) and Jordan Greenway (bass). The band released their long-awaited debut full-length, Back to Beautiful, on July 14th, 2017 via Equal Vision Records. The album was recorded in Los Angeles, CA with producer Erik Ron (Saosin, Panic! At The Disco).
On Back to Beautiful, Hollis says, “The title Back to Beautiful is referring to the early days of the band where we had all relocated to Houston and I went through a rough break up. We were engaged, and I thought I had life from there on out figured out, but I didn’t. It hit me hard mentally and physically. I wasn’t my normal self. I wasn’t sleeping enough because I kept having the same nightmares over and over and when I was awake I was lost in my own thoughts of why things were the way they were.“
He continues: “I felt like I wasn’t good enough for anyone, I felt like I was a burden on everyone around me because I was in this rut and I was afraid I would drag everyone around me down into it. This feeling lasted until around the time we finished the record. It was as if I had gotten whatever was making me ill out of my system and my entire demeanor began to reflect the change.“
Picturesque is led by the truly stunning vocal range and power of Hollis and is supported by equally notable instrumentations that blend rock, post-hardcore and pop influences. The band has toured and shared stages with the likes of I the Mighty, blessthefall, Like Moths To Flames, Our Last Night, SECRETS, SYLAR, and more.
Back To Beautiful can be purchased now at evr.lnk.to/backtobeautiful.
For More Information, please visit:
Website: www.picturesqueband.com
Facebook: www.facebook.com/picturesque
Twitter: www.twitter.com/picturesqueband
Instagram: www.instagram.com/picturesqueband
WHO: Picturesque w/Slaves & Escape The Fate
WHERE: Soundbar | 37 W Pine St | Orlando, FL
WHEN: Wednesday, October 3rd | Doors: 6pm
INFO: http://bit.ly/2Nvr5IN | $20 | All Ages
Upcoming Tour Dates:
9/7 – Pomona, CA @ The Glasshouse
9/8 – Fresno, CA @ Strummers
9/9 – Sacramento, CA @ Holy Diver
9/11 – Salt Lake City, UT @ The Complex
9/12 – Denver, CO @ The Marquis Theater
9/13 – Merriam, KS @ Aftershock
9/14 – Indianapolis, IN @ Emerson Theatre
9/15 – Grand Rapids, MI @ The Stache
9/16 – Joliet, IL @ The Forge
9/18 – Columbus, OH @ Skully’s
9/19 – Cleveland, OH @ The Foundry
9/20 – Erie, PA @ Basement Transmissions
9/21 – Ottawa, CAN @ Mavericks
9/22 – Quebec City, CAN @ Salle Multi
9/23 – Albany, NY @ Upstate Concert Hall
9/24 – Portland, ME @ Port City Music Hall
9/26 – Hartford, CT @ The Underground
9/27 – Virginia Beach, VA @ Shaka’s
9/28 – Jacksonville, NC @ The Tarheel
9/29 – Richmond, VA @ Canal Club
9/30 – Spartanburg, SC @ Ground Zero
10/3 – Orlando, FL @ Soundbar
10/4 – Tampa, FL @ The Orpheum
10/5 – Miami, FL @ The Ground
10/6 – Birmingham, AL @ Workplay
10/7 – Memphis, TN @ Growlers
10/8 – New Orleans, LA @ House of Blues
10/10 – Laredo, TX @ Ethos Live
10/11 – El Paso, TX @ Tricky Falls
10/12 – Albuquerque, NM @ El Rey
10/14 – San Diego, CA @ Soma