TESLA is kicking off their upcoming North American tour in September with the first date in Loveland, Colorado at Thunder Mountain Amphitheater on Sept. 1.
They have developed their already high energy show into a modern production, the band has added multimedia visual screens to enhance the concert performance. “The visual enhancement is a new thing for us and it’s made the band really play a tighter show. One of the songs, “What you Give” has a photo montage that shows us as youngsters and the fans have really enjoyed that!” Says guitarist, Frank Hannon.
The band is currently gearing up to release their anticipated new album produced by Phil Collen of Def Leppard. This comes after the band released “Mechanical Resonance, Live!” (TESLA Electric Company Recordings/Mailboat), which celebrates the 30th-birthday of the original multi-platinum album and features classic hits as well as a brand-new track, “Save That Goodness,” written by Phil Collen (Def Leppard). 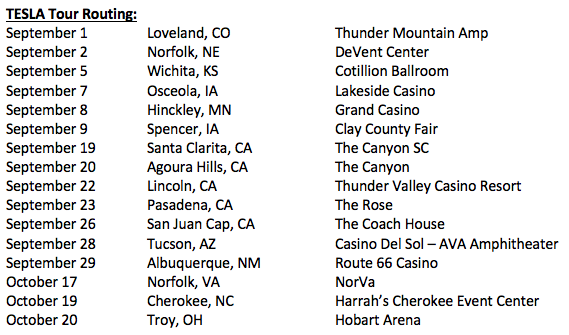