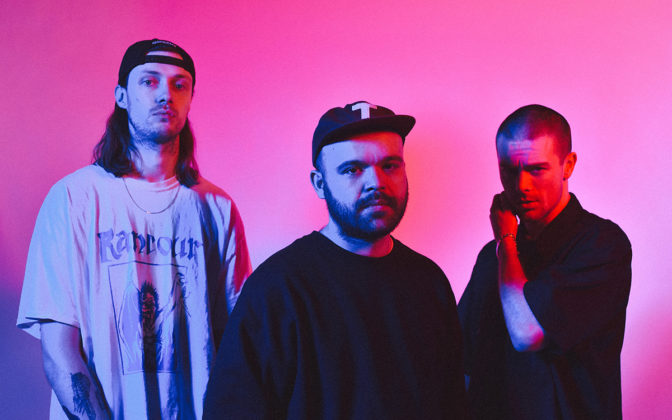 The band, known for its earworm melodies and “anything goes” experimentation, has premiered the video for its debut single “Black Hole” via Revolver.

uppy vocalist/guitarist Jock Norton said, “We chose ‘Black Hole’ as the lead single because we felt that, both lyrically and musically, it really sums up the vibe of the album as a whole — fun and upbeat, but with a dark, sinister element underpinning the whole thing. With the video, we wanted to reflect that and to show a bit of what’s gone into recording our music.”

He continues, “This record has been nearly two years in the making, and in that time, we’ve been on a lot of tours and spent a lot of time together in various studios, so we had a good supply of video footage covering it all. But what we ended up capturing over that period, in the studio and on camera, turned out to be far more sinister and malevolent than we initially imagined. I think the album is better for it.”

If you want an additional look into the heart and the sound of Puppy, go ahead and watch their batshit crazy promotional tour video HERE.

ABOUT PUPPY:
Since releasing their Vol II EP in 2017, Puppy have been climbing the ranks of rock music, featuring on Guitar Hero with “Forever” and appearing at a host of major festivals including Download, Reading & Leeds, Glastonbury, and Bloodstock, the latter pair representing a festival double-header that few bands could pull off.

A similar eclecticism has informed their choice of tours; to date, the London-based trio — Billy Howard, drums; Will Michael, bass/backing vocals; and primary songwriter Jock Norton — have shared bills with everyone from glam-punks Creeper through to doom metallers Conan and skater boy icons CKY, all the while collecting praise from the likes of The Guardian, Radio 1, Noisey, Kerrang!, DIY and more.

And now, with The Goat, we see Puppy diversifying even more, taking the left-field melodic turns of Weezer, the hazy fuzz of Smashing Pumpkins, and the straight-to-the bone sonics of the Big Four of Thrash to fashion an idiosyncratic sound that is truly unique. It’s a melting pot of collective interests and ambitions, and one that hides a dark, bloody, occult-esque heart under its catchy melodies and scream-along, festival-ready choruses.

With eight of the album’s 12 tracks produced by Neil Kennedy (Creeper, Boston Manor) and the remaining four by Tom Dalgety (Royal Blood, Ghost), The Goat is a record that’ll inspire grins from even the most grizzled of metalheads and headbanging from the most hesitant of indie kids, dodging convention and pretension at every turn in favour of a fun-first approach.

Of the dozen tracks in question, all mixed by Adrian Bushby (Foo Fighters, Placebo), “Demons” is an updated version of the 2017 stand-alone single/video, while “Entombed” is a ground-up re-record of what has effectively become a signature Puppy tune; the other 10 songs are brand new, with “I Feel An Evil” seeing Will Michael step into the lead vocal spotlight for the first time.