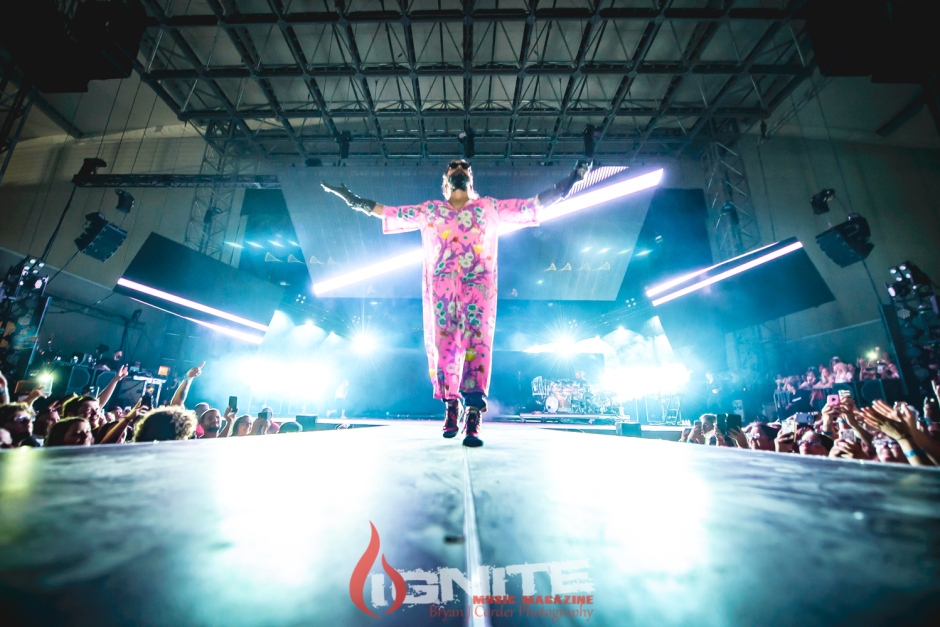 It’s not very often that a concert has 4 high energy bands back to back, but that is exactly what happened July 1st when the Thirty Seconds to Mars Monolith tour hit Daily’s Place Amphitheater. Opening up the show was the New York-based band, Joywave. Their sound was a blend of indie rock and pop/electronica. The band first became known for an electronic music collaboration with musical group, Big Data, in 2014. Their music was very unique as was their frontman, Daniel Ambruster. This was the band’s last show with the Monolith tour so they really gave it their all with a nonstop set.

Next up was another band out of New York called MisterWives. They had more of an indie pop/alternative dance sound complete with a saxophonist. The band was formed in 2012 because lead singer Mandy Lee wanted to start an 80’s cover band. The crowd danced along with her throughout the entire set. MisterWives gained some new fans with their cover of The Cranberries’ song “Dream“. Joywave’s Ambruster even joined them onstage for the song and did a phenomenal job with singing the chorus.

The final opening band of the night was the Ohio indie rock band Walk the Moon. Frontman Nicholas Petricca was absolutely terrific starting off with their hit song “One Foot“. The band played all the fan favorites including “Portugal, “Different Colors“, and their most popular song “Shut Up and Dance“. The band was slightly confused by the crowd chanting “Duuuval” stating that from the stage it sounded like the crowd wasn’t happy. That couldn’t be farther from the truth. Walk the Moon did not disappoint and the fans were on their feet dancing until the band closed out the set with songs “Headphones” and “Anna Sun“.

Headliners Thirty Seconds to Mars took the stage while the instrumental “Monolith” played, creating a wave of anticipation throughout the crowd. Jared Leto then burst onto the stage wearing a bright pink housecoat and sunglasses. They kicked off the set with the hit songs “Up in the Air” and “Kings and Queens“. Leto had the crowd chant “This is War” before launching into an energetic performance of the song. He then asked MisterWives lead singer Mandy Lee to join him on stage for the song “Dangerous Night“. Next up were songs “Do or Die“, “Hail to the Victor” and “Great Wide Open“. Jared Leto paused to address the crowd about how Jacksonville will always be a special place to him because it is where he and his brother recorded the album “A Beautiful Lie” in 2005. He promised that the band would always make a stop here and that Florida is the only place that he doesn’t mind sweating. Leto sang the chorus of the song “Attack” acapella and then called for all the opening bands to join him on stage for the song “Rescue Me“. No other frontman works a crowd the way Leto does. Grabbing fans onstage to help judge which side of the amphitheater is louder, having fans throughout the venue waving flags, as well as having a group of fans side stage throughout the entire set. It is no surprise that for the final song, “Closer to the Edge” he brought a bunch of fans up on stage to dance alongside the band while being showered with paper confetti.

The bands on the Monolith tour deserve a lot of credit. They all put on such an amazing show from start to finish and with so much energy. Even though it was summertime in Florida it didn’t seem to bother any of the bands or the crowd. Both danced and kept the party going the entire time regardless of the heat. The Monolith tour is definitely a must see show.