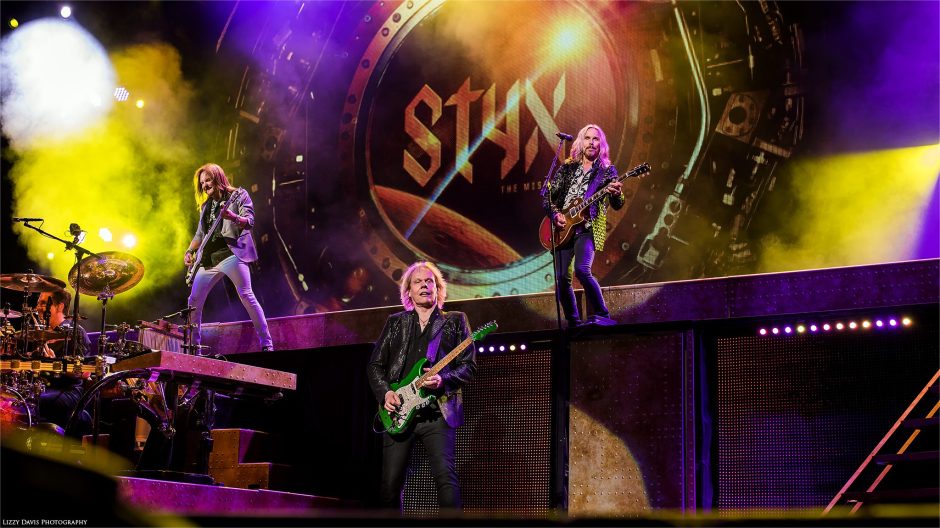 Styx and Joan Jett have teamed up with Tesla for yet another epic summer tour! The trio of classic rock packed MidFlorida Credit Union Amphitheater in Tampa, FL on Sunday, June 17th to let many celebrate Father’s Day in a slightly less traditional style.

The longtime hard rockers of Tesla opened up the evening as the crowd was still filling in. Although they have 35 years and eight studio albums behind them, their eight-song set only left enough time to scratch the surface. The band mainly stuck to fan favorites, ensuring the crowd livened up with, “Signs,” “Love Song,” and “Modern Day Cowboy.” Tesla is currently working on a ninth album titled ‘Shock,’ which is tentatively due for release later this year.

After a quick set change, Joan Jett, supported by her band The Blackhearts, came blaring on stage, still sporting her iconic black hair and leather outfit. The 2015 Rock & Roll Hall of Fame inductee wasted no time getting into high gear, kicking open the set with “Bad Reputation,” and immediately following it with “Cherry Bomb.” A little over halfway through the set, one of Jett’s bandmates announced that they have a documentary coming out in September that follows Joan Jett’s journey through the years. The documentary, titled “Bad Reputation,” premiered earlier this year at Sundance Film Festival and features the all-new song “Fresh Start,” which the band incorporated in their set. A notable number of songs in Joan Jett’s setlist were covers – “Light of Day” originally by Bruce Springsteen, “Love Is All Around” by Sonny Curtis and “Crimson & Clover” by Tommy James & the Shondells. Following a crowd engaging performance of “I Love Rock ‘n’ Roll,” Jett closed out her set on one more cover, Sly & The Family Stone’s “Everyday People.”

Although Joan Jett & the Blackhearts are technically co-headliners on this tour, Styx lit up the closing spot. The stage was decorated with an impressive production featuring large risers and a massive video board, which each band member emerged from one by one before taking their spots and launching into “Gone Gone Gone.” The song is the lead single off their latest record and concept album ‘The Mission,’ which was released exactly one year and one day prior to the Sunday show.

The tour is partially commemorating the 40th anniversary of Styx’s 1977 breakthrough album, ‘The Grand Illusion,’ which became quickly evident as the title track was the third song of the set. “Fooling Yourself (The Angry Young Man),” and “Miss America” were also played – and no Styx show would be complete without a performance of, “Come Sail Away!”

As the inevitable end of the set approached, most band members left the stage, leaving only Lawrence Gowan and his keyboard in the spotlight. Gowan joked with the crowd stating it was the first time they’d played in Florida when it hadn’t been torrentially downpouring. He proceeded to ask the crowd if they wanted to sing along, promptly diving into the unmistakable opening notes of Queen’s “Bohemian Rhapsody.” The multi-talented performer sang and danced around his keyboard’s spinning platform – even playing backwards at one point in his solo medley.

The remainder of the band returned with liveliness and a surprise as the backdrop changed to Japenese characters and distinctive synthesizer notes reverberated through the amphitheater. Prior to this tour, “Mr. Roboto” had not been performed live in 35 years, and there was no denying how much the fans were loving it. The focus shifted to guitarist Tommy Shaw, who took over vocals for the final encore of “Renegade” and a massive blast of confetti showered the crowd as Styx ripped up the stage one more time.

These icons have been rocking the stage for decades after decades and offer a must see experience for all generations to enjoy. This tour kicked off in late May and will continue midway through July, concluding in Holmdel, NJ. Don’t miss your chance to be a part of this voyage!

Photos and review by Lizzy Davis