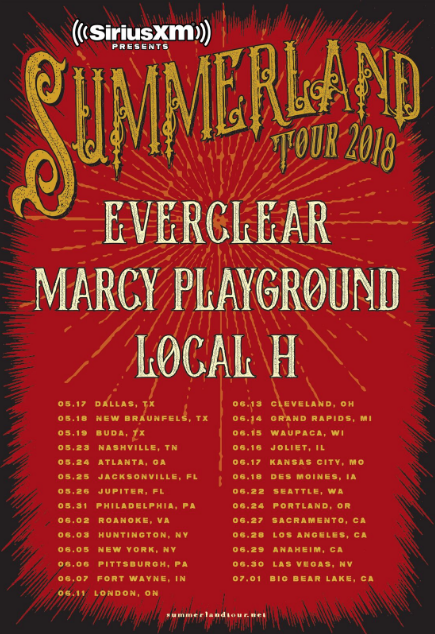 The Summerland Tour, presented by SiriusXM,  return this Spring for its 6th run across the United States. With a lineup including Everclear, Marcy Playground, and Local H, the 2018 Summerland Tour kicked off in Dallas, TX on 5/17, and stopped in at Mavericks live in Jacksonville Florida on 5/25 for one hell of a rock show!

Local H hit the stage first to get the crowds’ blood pumping and did just that. They two guys can play and the fill Mavericks lives’ air with songs like.”Eddie Vedder”, Freshly Fucked” and “High Five MF”. This duo sound is so good, they sound like 5 guys playing. They put on a killer set you have to see to believe. I have seen them many times and they never disappoint!
Marcy Playground took it to the stage next and ever looked back. Hitting the crowd with “Poppies” straight out of the gate. This got the people that packed the place jumper and throwing their fists in the air. The band sounded fantastic, and the fans were very happy about that. They proceeded to get down to business playing “Rock and Roll Heros”, “Bye Bye” to the delight of many. Marcy Playground has this rock and roll stuff down, and put on a show that would make any other band jealous.
Mavericks Live was buzzing with excitement as the night went on. The place was hot and sweaty, just like summer. The fans were ready to get down and rock the hell out with Everclear. Art and the guys ran out on stage and started the show off with “Heroin Girl” and the crowd went crazy with excitement and transitions to one of the bands biggest hit “Father Of Mine” with the fans singing every word with Art. Everclear is one of those bands that just sounds fantastic on stage. They really know how to engage with the crowd and it really shows that they really love their fans. They are not just a 90’s band, they play great music that would be hits today! And hits they played like “I will buy you a new life” which ended the show with a bang!! Everclear is a band that just doesn’t get old at all to listen to or see on stage, they are the real deal. This show is for the memory books for sure, and it will be hard to top this year Summerland Tour next year, but I will be going next year no matter what!
Created in 2012 by Everclear frontman, Art Alexakis, the Summerland Tour has become a summer tour favorite of fans and critics alike, with Rolling Stone naming it one of the “10 Hottest Summer Package Tours”. Alongside Everclear as its recurring headliner, past Summerland lineups have featured notable alternative rock bands such as Sugar Ray, Lit, Soul Asylum, Eve 6, Space Hog, Gin Blossoms, Live, Fuel, American HiFi, The Toadies and Filter, making it a go-to tour for fans of ’90s nostalgia.

Alexakis shares: “This year the Summerland Tour will be a different look at ’90s alternative and the different facets of what it’s about. I think it will be really cool because it’s usually guitar-based, but Marcy Playground is more acoustic-based and Local H is two guys that make a whole lot of beautiful noise. With Everclear, we’re going to play the hits we always play, but we’re also going to mix it up. Every night will be a little different; there’ll be a few surprises every show.”