Grammy Award-winning superstar and pop icon Christina Aguilera has announced a new North American tour this fall, her first outing since 2008. The music powerhouse will kick off the tour, produced by Live Nation, on September 25th and travel to 22 cities, performing at many of North America’s most intimate venues including two dates at New York’sRadio City Music Hall, two dates at The Chicago Theatre, and stops in Boston, Oakland, Denver, Los Angeles, Las Vegas, and more. 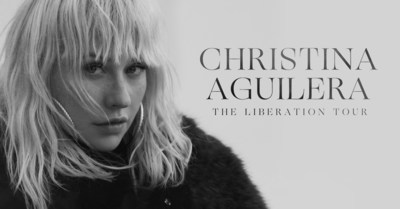 Christina released new song “Accelerate feat. Ty Dolla $ign and 2 Chainz” earlier this month, the first song from her forthcoming and highly anticipated album, Liberation. She will also be performing “Fall in Line,” her newly announced duet with Demi Lovato, at the Billboard Music Awards on May 20th.

Liberation will be released Friday, June 15th and is available for pre-order now. Every online ticket purchased for Christina Aguilera’s 2018 tour includes a standard CD copy of her new album, Liberation. Instructions on how to redeem a copy will be provided by Ticketmaster within 24 hours of ticket purchase via email.

*Not a Live Nation date

Christina Aguilera is a Grammy Award-winning singer-songwriter renowned for her powerful voice and hit songs. Throughout her career, she has sold more than 43 million records worldwide. Aguilera has achieved five No. 1 singles on the Billboard Hot 100 chart making her the fourth female artist to top the chart over three consecutive decades (1990s, 2000s, and 2010s). She has won six Grammy Awards including one Latin Grammy Award. She has also received a star on the Hollywood Walk of Fame and holds the prestigious honor of being the only artist under the age of 30 included in Rolling Stone Magazine’s list of the 100 greatest singers of all time. In 2011 she entered the world of television as a coach on NBC’s Emmy Award nominated show The Voice. Aguilera continues to use her voice for good. She has served as global spokesperson for Yum! Brands’ World Hunger Relief effort since 2009 and has helped raise over $150 million for the World Food Program and other hunger relief agencies.