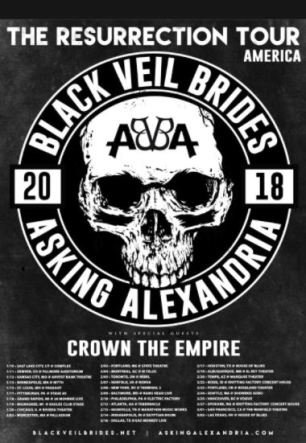 Excited to see Asking Alexandria co-headlining on the “The Resurrection Tour” with Black Veil Brides, I was startled to see the paramedics already at work before the doors were open.  On Friday, February 2, I stepped up to the Box Office to collect my ticket and wondered what kind of night I was about to experience, seeing Asking Alexandria live.  However, luckily, the fan who had been waiting in line for several hours just had some mild hypothermia and would get to enjoy the show as planned.

Considering Black Veil Brides was closing this co-headlined show, the emo followers were out in full force.  Asking Alexandria has been around for awhile now with five studio albums under their belt, so I was caught off guard by the youthfulness of the crowd and feeling slightly out of my element, considering I was in the same venue the previous night to witness Corrosion of Conformity and Black Label Society grace the stage.  In contrast, the bar was easier to access, as Crown The Empire started to warm things up for the mostly underage crowd.

I was a little surprised Asking Alexandria started the set with their latest hit single “Into The Fire” off their 2017 self-titled album, which is also featured on the American Satan soundtrack.  However, it made sense after all considering the newer music is a little harder rock/metal than the metalcore older albums, so this was a nice warm-up for the assault to follow.  “Killing You” kicked in next, along with various songs off the 2013 album From Death to Destiny, their highest charting album to date, combined with a perfect mix of others off of their other studio albums.  Shirts, jackets, water bottles, and crowd surfers were flying above the tightly packed floor.  The energy and music were non-stop with the exception of vocalist Danny Worsnop saying that Worcester was the best show on the tour yet and exclaiming he was horny, inciting even more energy from the already frenzied crowd.  The sound was on point, not too deafeningly loud, as many concerts seem to me lately.  I thoroughly enjoyed the entire set by Asking Alexandria, right down to the visually artistic, yet simple lighting.  Knowing, I was going to be writing a review, I tried to take the show it in with all my senses, (including the no-fail stench of armpits and spilled beer), watching the masses lose themselves in the music.  Surprisingly, there was no moshing to be had, but I think that was purely due to the fact that there wasn’t room to do so.  Asking Alexandria ended appropriately with “The Death of Me” and I felt content that Danny, Ben, James, Cameron, and Sam had given Worcester a show to remember.  As promised in the opening song, “I’ll give it all ‘till there’s nothing left.”  The band no doubt held up to this undertaking.

Black Veil Brides came out next screaming of pure sexiness and the hordes of the younger generation, black facial paint and all, were elated.  Perhaps it was due to a lack of heavy alcohol consumption or the heavy police detail and very attentive security, but it seemed to be a night of little violence despite the one overzealous guy who was promptly escorted out by security (and later by the police in handcuffs) for inappropriate touching of some female attendees.

This tour with Asking Alexandria, Black Veil Brides, and Crown The Empire continues into March, so if you are a fan of any of these bands or just want to enjoy a good rockin’ show, make sure to catch them in a city near you.  Asking Alexandria alone was worth it in my opinion.