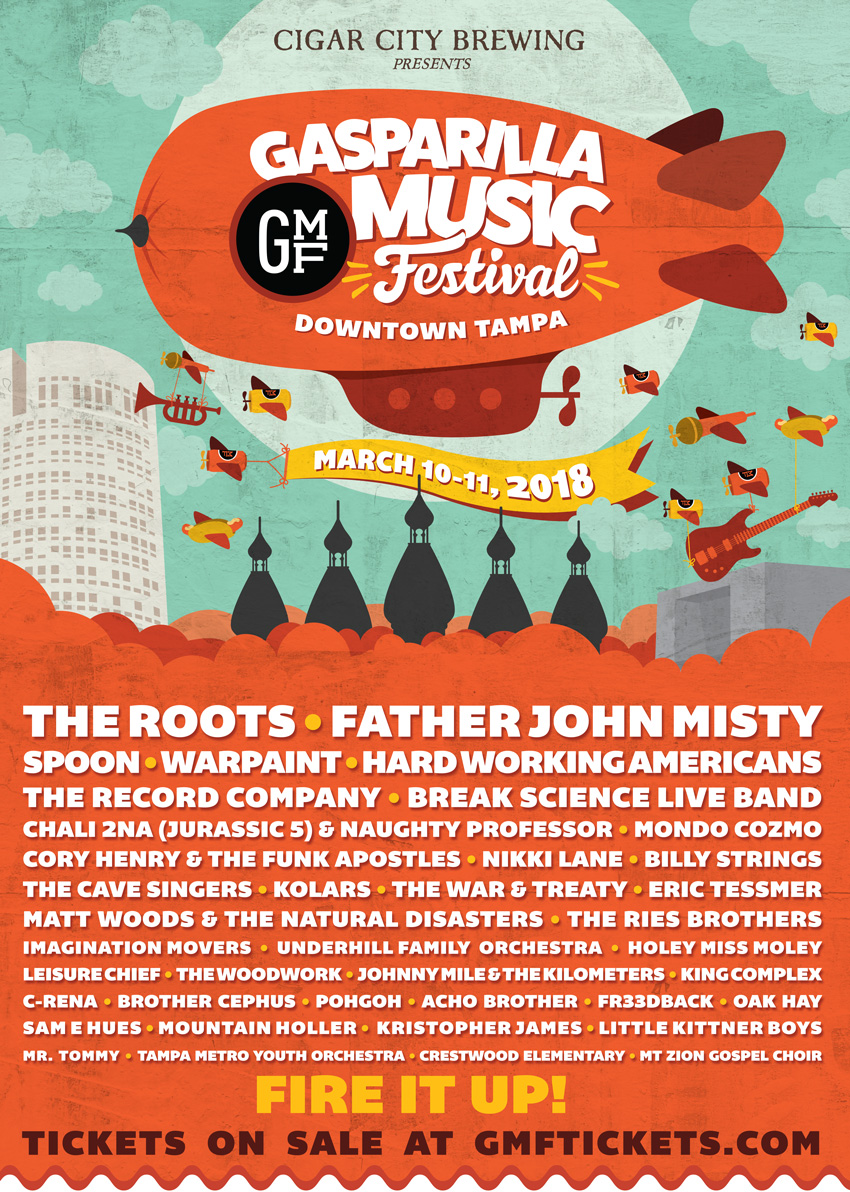 The Roots, who have been lauded by Rolling Stone Magazine as one of the “Twenty Greatest Live Acts in the World,” will be headlining Saturday night, March 10th, and multiple 2018 Grammy® Award nominee Father John Misty will close out the festival on Sunday, March 11th.  GMF’s popular KIDS FEST, which is held at the Glazer Children’s Museum, boasts Disney Channel’s Emmy winning Imagination Movers at the top of the bill on Sunday, March 11th.

The Gasparilla Music Festival now in its 7th year, is a non-profit event and serves as an immersive experience celebrating the best of Tampa culture: its food, music, fashion, art, and, of course, award winning beer from Cigar City Brewing. In addition to live performers the festival offers activities for families, performances by local artisans, aerialists, dancers, hair-braiders, crafters, drum circles, double dutch jumpers, pop-up performers, marching bands and more.  Each morning the fest within a fest – Kids Fest- takes place inside the Glazer Children’s Museum where in addition to activities and family friendly music, on March 11th the award winning Imagination Movers will perform and the entire museum will be open to the public with free admission.
The festival takes place along downtown Tampa’s Riverwalk and features 5 stages including he Frontier Stage at Curtis Hixon Waterfront Park and the Sykes Stage, the Ferman Amphitheatre, and the Replay Guitar Exchange Stage in the adjacent Kiley Gardens Park. The Glazer Children’s Museum will also be hosting a Kids Fest Stage on March 11. Gates open at 11:30am each day.
Early Bird tickets for the festival sold out in record time. Festival-goers are encouraged to get tickets in advance via:  www.gmftickets.com.

“Gasparilla is a music fest on a mission” – Consequence of Sound

Tickets to the festival are available at www.gmftickets.com

The 2018  lineup for Gasparilla Music Festival is: