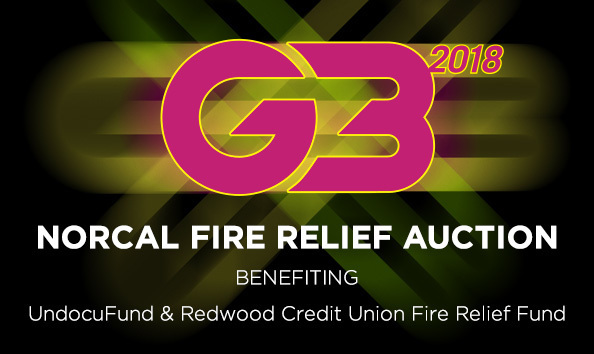 (San Francisco, CA) January 12, 2018 –  World-renowned guitarist, and Bay-Area resident, JOE SATRIANI announces a fundraising auction, set to launch this Sunday, January 14th, at the Fox Theater in Oakland, CA to benefit the North Bay Fire Relief in Sonoma County.  The online auction will be live for one week, with bidding ending on January 21st (http://g3tour.com/norcal-fire-relief)

The auction will feature autographed collectible guitars from JOE as well as his G3 Tour-mates (John Petrucci & Phil Collen), in addition to guitars signed and donated by fellow Bay Area Residents: Carlos Santana and Neal Schon.  Other items up for auction include a Huey Lewis signed harmonica and a Bill Gibson signed drumhead, along with signed posters and memorabilia from past G3 tours.  Net proceeds will go to North Bay Fire Relief, including UndocuFund, directly assisting the affected undocumented residents of Sonoma County. The auction is being curated and administered by Bananas at Large.

SATRIANI has lived in the Bay Area for over 30 years and considers it home.  His longtime manager, Mick Brigden, was directly affected by the fire as his entire neighborhood was destroyed, although thankfully, his house was spared.  Raising funds to support those affected in their own backyard is important to the multi-Grammy nominated guitarist.  SATRIANI says, “This special auction for North Bay Fire Relief in Sonoma County is close to my heart.  So many of my friends and coworkers are still in need after the devastating wildfires. Please join me and my musical buddies in raising some funds to provide some love and care. Thank you!”

The UndocuFund for Fire Relief in Sonoma County was created by local immigration service providers to directly assist undocumented Sonoma County residents who are victims of the Northern California fires. With the support of more than 7,500 donors, the fund has provided financial aid to almost 1,000 families, to date, benefitting nearly 4,000 people, with hundreds more still to be screened. One hundred percent of all donations go to victim support, with partners covering all administrative costs. To learn more about the fund’s impact on victims and other details, please visit www.undocufund.org.

Redwood Credit Union Community Fund, Inc., in partnership with Redwood Credit Union (RCU), The Press Democrat, and Senator Mike McGuire, accepts financial donations to assist fire victims and aid relief efforts. 100% of tax-deductible donations goes directly to support those affected.  The North Bay Fire Relief Fund supports the immediate needs of people and businesses in the four affected counties (Sonoma, Napa, Mendocino and Lake) who were impacted by the North Bay fires, including: People who lost homes, People experiencing economic hardship due to lost or interrupted employment as a result of the fires, First responders who lost homes while fighting fires and protecting our communities, Kids who lost homes (public and private), Small businesses who lost their business or were impacted by the fires, Fire survivor health and well-being, Nonprofit grants were also available for those supporting immediate needs of fire survivors.  For more information: https://www.redwoodcu.org/northbayfirerelief

About Bananas at Large

Bananas At Large is the oldest Independent Professional Audio and Musical Instrument retailer in the Bay Area, with over 45 years of experience serving everyone from the beginner to the touring professional. We carry all major brands and models, and also a wide range of unique and boutique instruments.