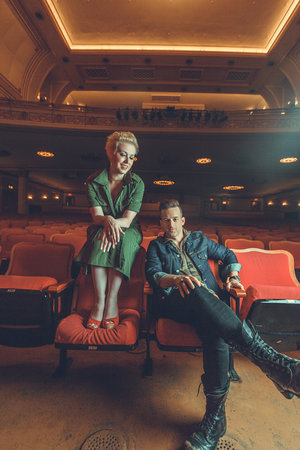 Keifer talks to Ignite Music Magazine to update status on the duo’s new music and tour.

IMM: Last year you were in a stall situation?

Keifer: Yeah, were out of the stall (laughter)

IMM: That’s good because I looked at your site and see new shows and new songs and basically to catch up what you have been doing

Keifer:  Yeah man, you know it’s been a little bit since we had a new album out and made a label change. When we left our record label and as soon as we did we started to make our record and actually we are finishing it this week. And will start dropping new music really quick and a bunch of new cool stuff coming up. The thing we want to focus on this year is give our fans more music because it was a stale mate where we’re at with our music and couldn’t put a album out and getting anything done on radio. We parted ways and a good decision on our part, there is no hard feelings on anyone’s part. It was time to go; we had a lot of fun and success and  time for another chapter. I think we easily made the best record of our lives and it was due to, to have the hunger again like when you make your first record. You’re out to prove a point and were able to choose the songs we wanted to sing and what our fans would appreciate and enjoy the most and to show what has been going on in our lives for the last three or four years.

IMM: You answer the bulk of the questions right there (laughter). But to follow up there with the transition with the record label but going forward starting with the new tour and the first show on January 21 at Indiana, it is a acoustic tour that you are doing?

Keifer: Actually it’s a mix of acoustic and a full band this year. November of last year we’ve been asked a lot that we play acoustic in our normal show and became very popular. People were asking us we wish you do an acoustic tour, we love to see that. So we saw a hole in the schedule of November of last year and you know it might be a great opportunity to test those waters. So we got with our agent and we put together a entire acoustic tour of the North East at these cool theaters and intimate settings we always wanted to do. We did it and was highly successful and is being bought for this next year so we thought to extend it for this year called “This Is Us Acoustic Tour”. So were extending that into 2018 with conjunction with our normal full band shows. That is where we are in our lives, that whatever we are doing that we are having doing it.

The acoustic part of it is so embedded in us and is really fun, and our fans really dig it and were getting bigger and bigger all year long. It will be fun to do it this year in conjunction with everything else

IMM: That’s good you are back and speaking for the new album is expected to be release in the spring time?

Keifer: Yeah, you guessed it. Were ready to announce that, with all the stuff in place with the artwork and teasers and all that stuff in place and will be getting ready to drop that information really quick

IMM: How many songs will be on this album?

IMM: And it will be a full band sound

Keifer: Oh yeah. One thing we wanted to do was work with different producers which we could never do. We got together with Dan Huff-producer and musician (Rascal Flatts, Lonestar, Doro Pesch, Whitesnake, Toby Keith, Shania Twain, Megadeath) who did a few songs with us and we got together with Nathan Chapman (Taylor Swift, Sara Evans, Keith Urban, Rita Wilson, Martina McBride, Rascal Flatts) we did five songs with him and did stuff on our own. So a free kind of experience not have the shackles on us and able to do what we wanted to do. It was fun and I think this year we probably will put one acoustic song on the record that we released as a bonus track of a cover song by U2 “With Or Without You” we always loved and played on the acoustic tour

IMM: You put the video out for the U2 song so put it on the album

Keifer: Yeah we probably will that we liked how it came out and it was literally me and Shawna in the studio with a guitar, very raw and organic. No bells or whistles or fancy stuff it was just us so it was a lot of fun to do that

IMM: Why did you choose that song?

Keifer:  I’ve been a U2 fan for years and years. When I was in high school I got turned on to U2 from a friend of mine who was exchange student from Spain. I was a sophomore when I discovered them. I’ve been enamored with their song writing and production of that band. That particular song for me help through some adolescent misguided relationships so has always had special place for me and there were so many songs we could have chosen. That particular song sonically started to work it up and showcases what I and Shawna really do. We didn’t rehearse that, I just started playing it, we started singing it and fumbling over these harmonies felt natural. That is why it was nice experience and we did that in our living room and that song stood out sonically so that is the one we went with. I think there will be a series of those songs that come out this year for our fan to look forward too

IMM:  On this tour you’re playing new songs? And more shows planned for this year across the country

Keifer: Yeah and doing about ninety shows this year and will be a full schedule.

IMM:  And to get radio play for the new album

Keifer: Yeah, It’s a exciting time for us and see if there is the right record deal for us and if not we will be doing what we’ve been doing and having fun again. At the beginning it didn’t feel fun for us and I think that is the point. If it’s not fun we stop doing it and we always love playing for our fans and they stuck though this with us through the down time and we had a kid and he is two now and took time off for that as well. Looked at life and what the most important things were and put those in the forefront and time to get back to work

IMM: Are there going to be videos made for the new songs from the album?

Keifer: Yeah, for this year is to make multiple videos for some of these songs in whole gag way but we will find out. We haven’t cross that bridge yet what exactly were going to do with that but if it make sense we will defiantly do it

IMM: Maybe reference to the videos you done before playing different characters that you’ve done before?

Keifer:  I love acting and Shawna dose to and acting like idiot too I do that very well

Keifer: I think so and go off from the record and writing the treatments. We written and came up with most of the treatments for the video thus far. I think it be most of that with no else to tell you what to do and do what you kind of do what you want to do, no one’s chiming in and diluting down what your vision for your artistry is. It should be a lot of fun to write these treatments and work with a great director. Our favorite video thus far is “I Got You”. We had blast and was a lot a fun and to play the different characters

Keifer: That can pretty cool man. I kind a like what is going to with the business in general right now because people tend to be gravitated to more organic especially in country and dose have to be this shitty production and they want to be in your living room and see how your life looks un polish. It will be fun this year and content driven for sure.

IMM: Is there an opening performer for this tour?

Keifer: On the acoustic tour Jake Rose https://www.jakeroserocks.com/. He went with us last year. He is a new artist, really great guy and song writer. I believe he will be on most of the acoustic tour this year. The band shows I am not sure

IMM: It was good talking to you again and the fans and I are waiting to hear the new songs

Kefier: I can‘t wait for you to hear the new stuff, its fun and it’s us.  Good talking to you and take care brother