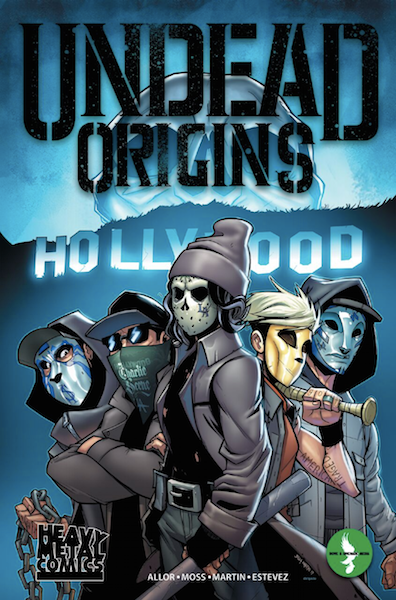 HOLLYWOOD UNDEAD TO STAR
IN THEIR OWN COMIC BOOK “UNDEAD ORIGINS”
NEW ALBUM FIVE OUT OCTOBER 27th
Pre Order The Album & Comic Here: http://smarturl.it/FiveStore
Los Angeles, California, October 5, 2017 – It’s a very small list of bands that can claim they’ve had their own comic book published and now Hollywood Undead can add their name to that list.  On December 6th, Hollywood Undead will partner with Heavy Metal Magazine to star in their own comic: “Undead Origins.”
Written by Paul Allor, the comic follows Hollywood Undead’s members as they discover a deep conspiracy; all across Los Angeles, people are acting unnaturally happy and compliant. People in the counterculture are suddenly fitting into society, finding square jobs and loving them. Is it clones? Robots? Alien replacements? The crew discovers that in reality, it’s a system of mental and physical alteration, funded by a powerful tech mogul-turned City Councilman. And what’s more, the “victims” aren’t victims at all; they’re undergoing the process voluntarily. But our guys won’t stand for that. They work to destroy the facility, assisted by like-minded people from across the city.
This 56-page comic ties in with the release of Hollywood Undead’s fifth studio album: FIVE.  The issue will hit retail shops on December 6th, however fans can order it directly from the band’s web store (http://smarturl.it/FiveStore) and receive it around the street date of their new album.
Hollywood Undead just began a North American tour in support of FIVE this past weekend at the Louder Than Life festival. For all U.S. headline shows, Butcher Babies will serve as direct support.  European dates will begin on January 24th in Glasgow, UK at the O2 Academy.
The number five holds a deep significance. We have five senses. Five points adorn a star. Five represents man in theology. For the five members of Hollywood Undead—Johnny 3 Tears, J-Dog, Charlie Scene, Funny Man, and Danny—the digit perfectly encapsulates their fifth full-length offering—FIVE [Dove & Grenade Media/BMG] out October 27th.  Fans can pre-order the new album from here: http://smarturl.it/HUFive
Hollywood Undead’s first three videos from FIVE have now amassed over 10 million combined views!
You can watch “California Dreaming” here: http://smarturl.it/CaliforniaDreamingV
“Whatever It Takes” here:
http://smarturl.it/WhateverItTakesVEVO
&  “Renegade” here:  http://smarturl.it/RenegadeVevo
“We’re five brothers, and this is our fifth record,” affirms Johnny 3 Tears.  “Nothing gets to the essence of the music like this number does. Numerology has a lot of power. When we said Five, it just made sense. The fact that we could all agree on one word codifies who we are. It also nods back to ‘No. 5’ from our first album, because it was our fifth song. Moreover, it hints at this secret society of fans supporting us for the past decade. The number is significant, and this is a significant moment for us.”
Known for atomic live performances, the quintet regularly sells out shows around the world from Massachusetts and Miami to Moscow and Manchester. They’ve toured alongside the likes of Avenged Sevenfold, Korn, and Stone Sour in addition to notching features from Billboard, Rolling Stone, Alternative Press, Revolver, and more.