I Set My Friends on Fire Extend Their Summer Plans

2017 has been a busy year for I Set My Friends on Fire and the band shows no signs of slowing down. They have been touring non-stop internationally, over the U.S, and recently, are a part of the first ever Tragic Hero Records Tour. Without even taking a break, the band kicks off the Arsonists Get All The Girls “The Game of Life” ten year anniversary tour.
With all the excitement surrounding the anniversary tour, I Set My Friends on Fire is thrilled to announce the second leg that hits the East Coast and extends their summer of touring. Guitarist Nate Blasdell shared, “We’re stoked to bring this tour back home and play for our friends and family.”
The “Game of Life” tour kicks off on July 15 in Victorville, CA with Arsonists Get All The Girls, Kingdom of Giants and West Cliffs and the full tour wrapping up on August 27th in Santa Cruz, CA. Select dates will also features Conquer Divide and Circuit of Suns.
AGATG’s 2007 release of “The Game Of Life” spread like a virus among fans all over and established the bands presence as innovators of heavy experimental music. Earlier this yearAltPress.com included AGATG in a gracious write up mentioning that “A decade later, The Game Of Life is still an absolute blast to journey through.” The music comes matched with the bands sheer brutality on stage, which fans can certainly anticipate on the upcoming tour. 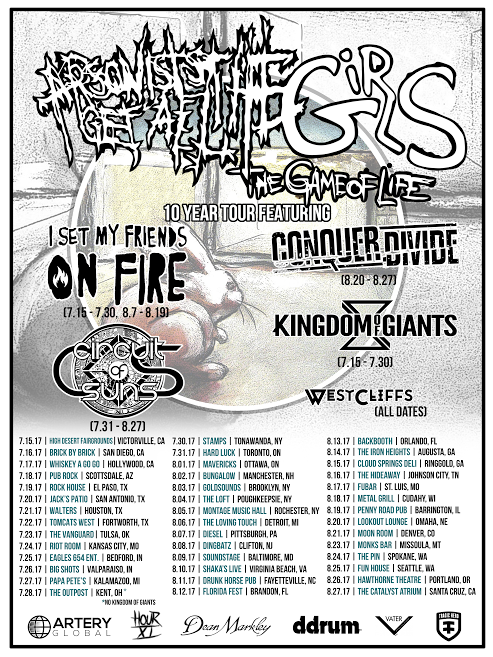