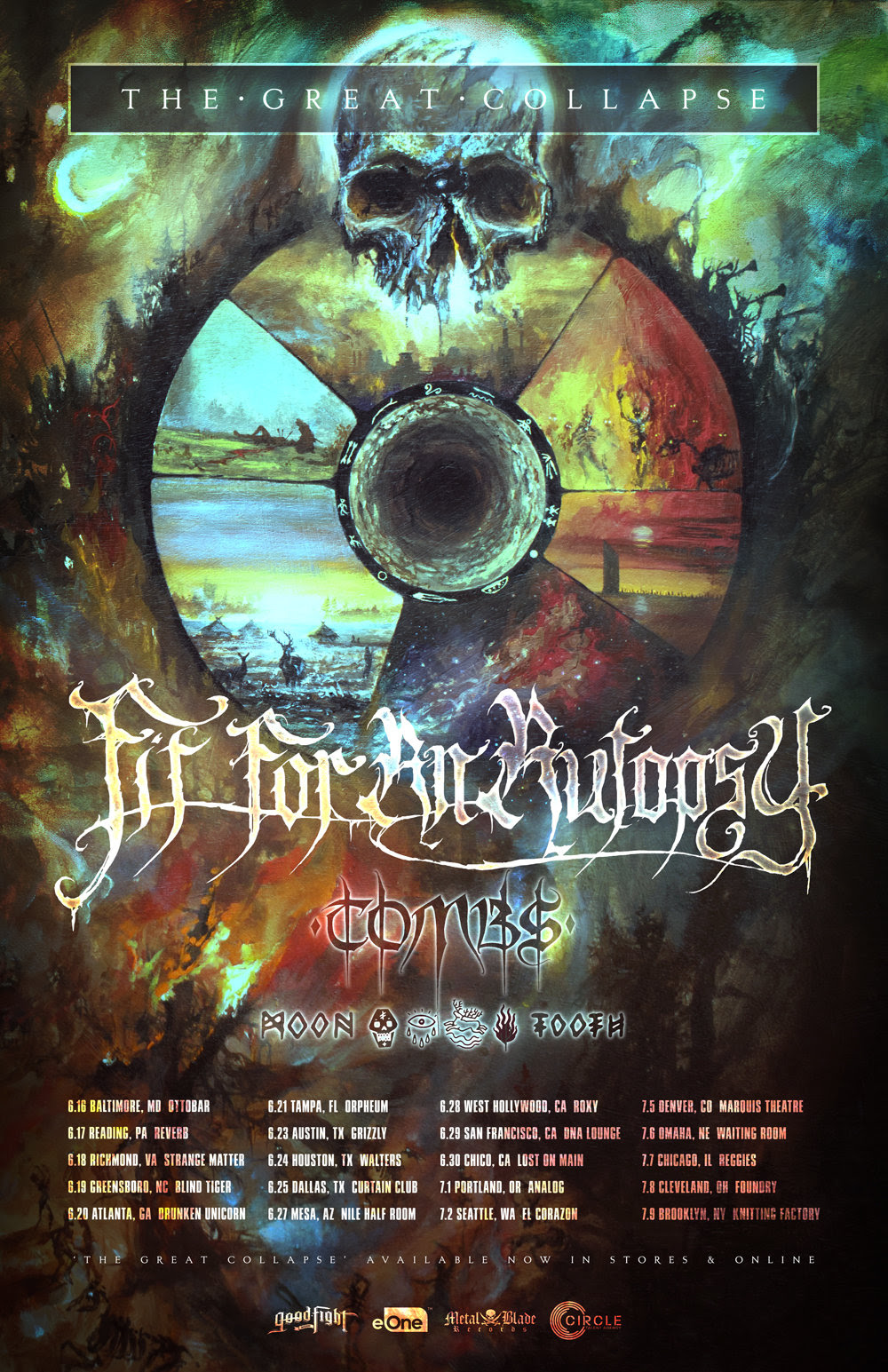 April 18, 2017 — FIT FOR AN AUTOPSY have announced The Great Collapse North American tour in continued support of their new LP of the same name. Support will come from TOMBS and MOON TOOTH. Dates kick off in early June and stretch through the first week in July. Tickets will go on sale Friday 4/21.

“We’re happy to announce The Great Collapse North American tour,” says vocalist Joe Badolato. “Tombs and Moon Tooth are sick live bands and make for a fun mixed bill. A little different than our normal touring partners, but we’re excited to play for some new fans. Lots of new songs on this one, and a few old ones we haven’t pulled out in years.”

Fit For An Autopsy released The Great Collapse on March 17, 2017 via Entertainment One (eOne) / Good Fight Music in North America and SPV overseas. Initial sales of the album landed the band on a variety of Billboard charts, some of which the first time in the band’s career. The Great Collapse debuted at #6 Hard Music, #9 Indie, #16 Rock and #47 Current Top 200.

The Great Collapse is the band’s fourth full-length record, continuing the momentum gained from a solid 200+ days of worldwide touring backing the buzz-worthy release of Absolute Hope Absolute Hell in late 2015, as well The Depression Sessions, a split release with The Acacia Strain and Thy Art Is Murder in 2016.
The crushing music of Fit For An Autopsy is for any fan of extreme metal, as it’s devoid of preachy politics or grandstanding soapboxing, but its sound and fury is absolutely unflinching in purpose. The band expertly blends excessive-force fueled death metal with atmospheric groove and impassioned personal diatribes, reflecting back the dark state of current events. Their fourth album, The Great Collapse, doesn’t waste time with fantasy bullshit or cliché gore horror. Fit For An Autopsy are metal guys, to be certain, but they grew up in the hardcore scene. They embrace the responsibility to put as much devoted purpose into their lyrics and message as they do into their dense, heady, songs, forging a magnificently powerful new post-deathcore.

“When I write a song, I’m trying to feel emotionally connected to it. I really don’t like saying things that don’t matter over music that I want to matter,” says Putney, guitarist, principal songwriter and co-founder. “We’ve always addressed serious topics going back to our first album. We aren’t a politically charged band up on a podium yelling at people – anybody can relate to the aggression, anger, frustration, and sadness often communicated in our music. But we absolutely raise important questions in the lyrics. Those themes are there to discover.”

Putney’s fellow guitarist/co-founder, Patrick Sheridan, strongly agrees. He emphasizes that while the music of Fit For An Autopsy may evolve it will always be aggressive and will always have a purpose. “We think it’s important to carry that torch. Somebody’s got to say something about the shit that’s going on. If you’re not using your music, which is a great platform, for something meaningful that you care about on some level, then you’re kind of wasting it.”

The six men of the New Jersey-based group – which includes vocalist Joe Badolato, bassist Peter Spinazola, third guitarist Tim Howley, and drummer Josean Orta – put maximum intentionality into everything they do. They are constantly challenging themselves as musicians, adding to the band’s overall creative arsenal, connecting with audiences around the world, and supporting one another in the band as individual people.