Murder F.M. has announced three new dates this July that include “Cruefest 2016” in Hollywood, CA at Whiskey A Go Go July 30th. 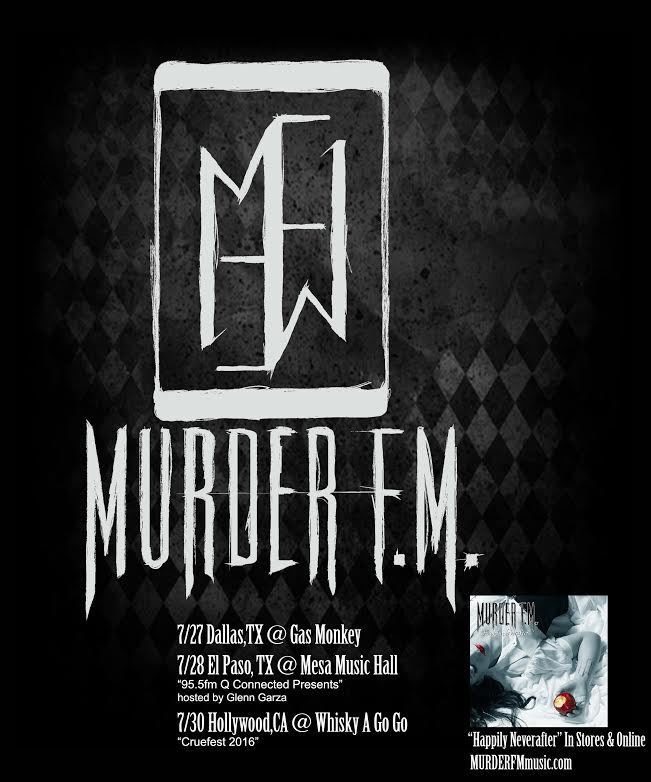 The new relationship milestone with Famous Records Global has magnified the development of the four- piece band that started as an outlet and release for 4 musicians from Texas and has become an organically built machine that takes on the quickly growing demand for the Murder FM style with larger than life energy and a headstrong work ethic. Upon experiencing some success with an initial independent record, Murder FM focused on building their home markets in Texas then pushed on to other markets in the US and internationally with a SOLD OUT UK Tour and opening stints or one-offs with BLACK VEIL BRIDES, ORGY, DAVEY SUICIDE, ESCAPE THE FATE, WED 13, HALESTORM, THE BECOMING, POWERMAN 5000, YOUNG GUNS, KORN,THE USED, LACUNA COIL, 69 EYES, THE BIRTHDAY MASSACRE, I AM GHOST, MODERN DAY ESCAPE, SICK PUPPIES, THE DEFILED, RED, TRAPT, ROB ZOMBIE, DEFTONES, AVATAR, FIVE FINGER DEATH PUNCH, and THE PRETTY RECKLESS.

After DRIVEN MUSIC CONFERENCE 2013 in Atlanta,GA, REBEL INK MAGAZINE’s “Featured Artist” MFM headed into being the FIRST US Band to perform at “Trashfest” in Helsinki, Finland and followed that steam into the first of two US runs before the Spring of 2014. Things really heated up when video success occurred on Scuzz TV and NME Europe followed by more video success when REVOLVER MAGAZINE “World Premiered” the Video/Single “WE THE EVIL” to over 150K Views in the first week, out performing many high-profile releases occurring simultaneously on Revolvermag.com and becoming the “Most Popular Story” behind ROB ZOMBIE. Now, as MFM have globally released Happily Neverafter, distributed by Sony/Red, the future is wide open and arena rock will live and breathe again in the fiery form of Murder FM!