Sunday at Aftershock was definitely a slower start.  We arrived just before noon and found parking in the second aisle.  Any minor issues with parking, lines, signage, etc. on Saturday had been resolved.  The crowd was much thinner on Sunday, but still large and ready to be entertained.  Before heading for the stages, we decided to check out some of the additional experiences.  Crazy Dave’s Music Experience was in full swing with interactive musical instruments and band members wandering through.  WWE’s NXT pavilion sported live matches and autograph sessions on Saturday.  And then there was the Tequila World tent serving extreme margaritas.  Did I mention that we had unbeliveably beautiful weather both days.  Sunday was slightly overcast and a bit cooler, but no one could complain about the weather either day.

Our first band on Sunday was Pink Slips, a cheeky punk rock group from Seattle.  Fronted by GRAVE (Grace McKagan), who worked the entire stage to an appreciative crowd.  One Ok Rock, a Japanese rock band gaining quite a following in the US, woke up the crowd with vocals by Taka, guitar riffs by Toru and Ryota  and fist pumping drums by Tomoya, ending with their best known new release, Mighty Long Fall.  The Sword, Highly Suspect, and Issues sets continued to draw more fans and get the blood flowing.

The duo of ’68 showed off their instrumental prowess and acrobatic abilities.  Josh Scogin, guitarist and singer, combined hard rocking music with jumps, backbends and incredible moves while drummer Michael McClellan kept the beat moving.  Sevendust took to the main stage mid-afternoon to the largest crowd of the day with their metal rock including Black, Praise, and Thank You from their just released album Kill The Flaw.  Failure, Sleeping with Sirens, Yelawolf to larger and larger crowds as fans continued to stream into the venue.  By the time Eagles of Death Metal brought their blues rock to the stage, the crowd was mostly recovered from the previous days’ festivities and ready to rock.  Prior to this festival, I was unaware of this band.  Comprised of only two permanent members, Jesse Hughes and Josh Homme, the remainder of the band is composed of guest musicians.  Jesse Hughes is a great frontman, working the crowd with ease and abandon, and reminding me of Mick Jagger.

Punk rock group All Time Low and heavy metal band Red Fang followed.  Stone Temple Pilots commanded the stage in the heat of the late afternoon with the crowd joining in on such favorites as Vaseline, Big Empty, Plush, Interstate Love Song, and closing with Dead & Bloated.  Death From Above 1979, performed their newest release Trainwreck 1979.  The energetic progressive rock band Coheed & Cambria opened their set with Island, got the crowd moving with 33, had them singing along with Here to Mars, and ended their set with Welcome Home.  The evening stages opened with Jane’s Addiction playing Stop. Perry Farrell’s vocals were first class as was the incredible guitar riffs of Dave Navarro throughout the entire set.  Been Caught Stealing was immediately a fan favorite of the set, followed by the hard-hitting Ocean Size.  The group lived up to the sex, drugs and rock n roll with their rendention of Whores, accompanied by two female dancers, and closed their set with Jane Says.

Sacramento based Deftones took the main stage to deafening screams, whistles and applause.  A sea of pumping fists was visible from across the venue as the band performed Head Up, Rocket Skates, and My Own Summer (Shove It).  They closed their set with Engine No. 9 to thunderous applause from a very pumped crowd.  Aftershock was closed by Faith No More, who, dressed all in white, popped up and down from behind enormous flower pots filled with silk flowers while they performed Motherfucker from their newest album Sol Invictus.  They played a twelve song set including Midlife Crisis, a cover of the Commodore’s Easy, Ashes to Ashes, and finishing with Superhero.  After several minutes of screaming, whistling, and clapping, Faith No More returned to the stage for a two song encore (We Care A Lot, Just A Man).

A throng of 20,000+ exited the venue for the drive home.  Aftershock was two long days of phenomenal music, great food, lots of drinks and thousands of people.  Kudos to all involved in bringing about this great festival in an extraordinary venue.  It’s a long trip from the East Coast to Sacramento, but well worth it….see you next year. 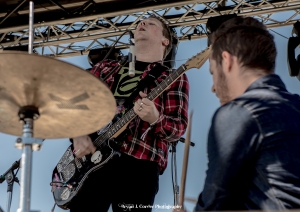 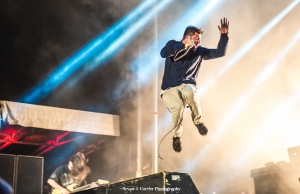