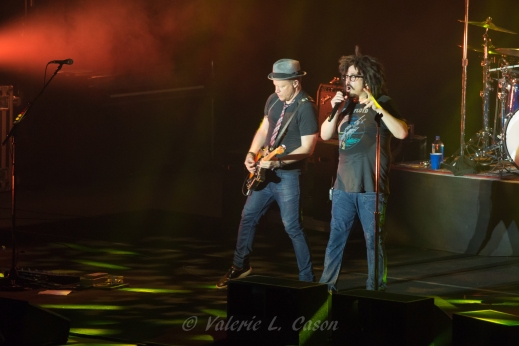 By Valerie Cason- St. Augustine,Fl. – A beautiful Sunday evening in St. Augustine prevailed as southern winds blew away any chances of a rain during the Counting Crows concert at the St. Augustine Amphitheater. The Counting Crows are touring in support of their album “Somewhere Under Wonderland” with a tour that kicked off in Florida and will journey through the US before wrapping up in October. Lead singer Adam Duritz would celebrate his birthday with a packed house at the Amphitheater that would include opening acts Hollis Brown and Citizen Cope. Hollis Brown kicked off their crowd pleasing six song set with “Sweet Tooth“. The band based in Queens, New York with its excellent songwriting had the audience still arriving and milling about the venue dancing and singing. “3 Shots” would follow and is the title track of their album, and the quintet shines with an amazing sound. They would close with “Ride on the Train” and “Rain Dance” and by this time their addictive sound most certainly captured new fans with an urban rock with a soulful bluesy feel that once heard you will not be able to get it out of your head, and do not want to do so.

Citizen Cope whose real name is Clarence Greenwood might not be known to all, but there is a chance you have come in contact with his work as a writer, producer, and performer with the likes of Richie Havens, Dido, and Carlos Santana. Touring with a full band his music delivers the blues, folk, and soul sound perfect for singing, dancing and swaying. Most iconic would be “Sideways”, perhaps best known being featured in an episode of the popular television series Scrubs as well as One Tree Hill, and other shows and movies. Bullet and A Target was an amazing performance and is easy to understand the numerous films and television credits given to the track. The set would include upbeat tempo, slow emotional tracks, and everything in between that delighted the crowd as the applause throughout would prove. 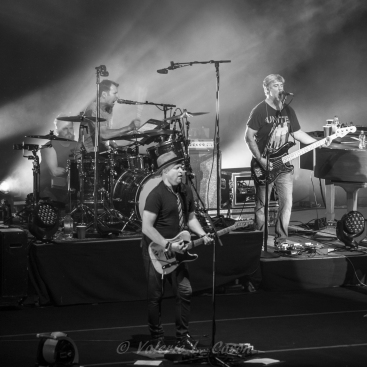 Under a setting sun,The Counting Crows would start it off to a roaring crowd with “Sullivan Street” off their 1993 album August and Everything After. Most prevalent in the 90s, the Counting Crows released Somewhere Under Wonderland in 2014, and are poised with the 2015 tour to delight audiences once again. The set continued with “Scarecrow” from the new album and the wildly popular “Mr. Jones” that brought the audience to its feet and their voices joined in. Duritz worked the crowd and the band had the energy so familiar to Crows fans.

Though touring in support of their latest album, the set list that by admission of Duritz changes for every show includes tracks from numerous albums equally with the newest release. Omaha, Mrs. Potter’s Lullaby, and Miami at mid set ending with You Ain’t Goin’ Nowhere, a Bob Dylan cover followed with A Long December and Hanginaround. A cranked up crowd and cheers would bring the encore that would begin with some of the best songwriting Counting Crows fans may have yet to hear from them.

The lone piano would begin and Palisades Park would be the start of the encore set. A song weighing in at over eight minutes, you will never feel as though it is too long. Duritz was at his best when he wrote this track and is the perfect intro for an amazing album indicating a triumphant return of the Counting Crows to the airwaves. Continuing with a very popular “Rain King” and closing out the show with “Holiday in Spain”.

The 2015 Somewhere Under Wonderland moves on to cities like Daniel Island, Nashville, Asheville, and Charlotte. The Crows are back, the songwriting is stellar, the music still moves, and the fans are still cheering.