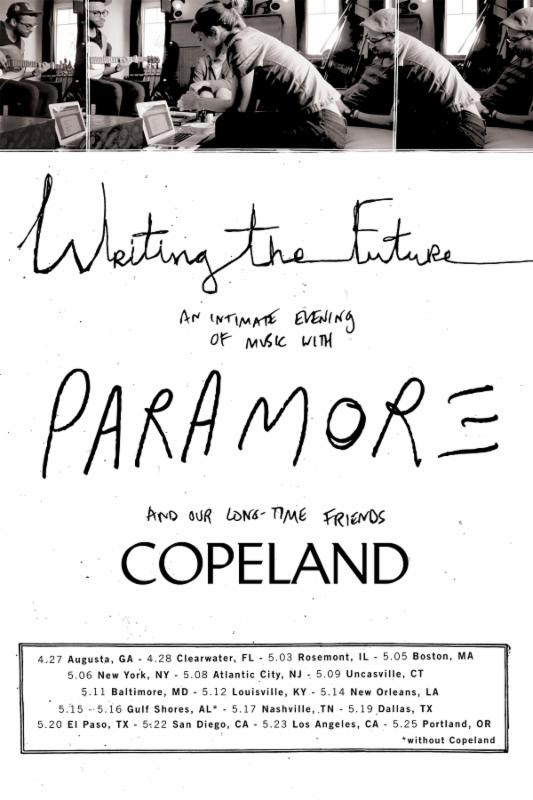 for a first album since their return from hiatus earlier this year, and doing it with a

mature album yet, Ixora. They haven’t completely reinvented their sound; they

Lakeland, FL – January 23, 2015 – Copeland is excited to announce that they will be performing as the sole support for Paramoreon their upcoming spring tour. Things will kick off on April 27th in Augusta, GA and wrap up in Portland, OR on May 25th. In regards to the tour, frontman Aaron Marsh tells us, “One of our most frequent brags is that we got to witness the talent of Paramore before the masses. We got to see their first show EVER and then watch as they grew up and transformed a genre. We are so excited and honored to do a lap around the country with them.” For more information and to purchase tickets, please visit:www.thecopelandsite.com.

Copeland, consisting of Aaron Marsh, Bryan Laurenson, Jonathan Bucklew, and Stephen Laurenson, formed in Lakeland, Florida in 2001. The band’s first album, Beneath Medicine Tree, came out in 2003 on the indie label The Militia Group. The album’s layered melodies, combined with Marsh’s thoughtful, emotive croon, immediately engaged music fans, offering a nuanced take on the emo music of the early ’00s. The group unveiled four subsequent albums between 2005 and 2008, including Eat, Sleep, Repeat on Columbia Records in 2006. Copeland signed with Tooth & Nail in 2008 and partnered with the label to release their long awaited sixth album, Ixora.Released on November 24th, Ixora charted at #10 on the Billboard Alternative Charts, as well as charting on the CMJ Top 100 Radio Charts.

The musicians spent much of 2014 working on new music, pulling some tracks from older material they’d set aside — one song,“Like I Want You,” Aaron found in a folder on his computer from 2009 and appears on the new album as a bonus track. Bryan and Stephen spent eight weeks in Florida at Aaron’s studio with Aaron at the helm of the production. “It was like picking up where we left off,” Aaron notes. The final ten-track album was also mixed by Michael Brauer, who has worked with everyone from Bob Dylan toColdplay, at Electric Lady in New York.

Copeland officially broke up in October of 2009 after nine years as a band. In their heyday, the band played over 200 shows a year. They’ve toured with Brand New, Sparta, Goo Goo Dolls, The Rentals, Bob Mould, Switchfoot, Motion City Soundtrack andGuster. Copeland has also historically supported new artists and Paramore’s first ever show was opening for Copeland in Nashville in 2004.

More Shows To Be Announced Soon