It was a cool, damp night outside of Freebird Live in Jax Beach, Fl on Tuesday January 13, 2015 but I knew that was all about to change quickly once I entered the venue.  This show was definitely going to be a rager, and that it was. With a top-notch Punk Rock Line-Up including headliner Pennywise, Anti-Flag, A Wilhelm Scream and the local opening band Flag on Fire. I was thankful to be able to catch the last couple of songs from Flag on Fire who had a great energy to start the night off.
Next on the Line-Up to perform was A Wilhelm Scream. A Wilhelm Scream is a melodic hardcore punk band out of New Bedford, Massachusetts. These guys have been around since 1999 and their experience showed as they took control of the stage as well as the audience while getting the pit warmed up for a great night of Punk Rock Music. Singer Nuno Pereira connected instantly with the crowd as they belted through their set which consisted of a good mix of some of their old and new songs. As they were finishing up, the crowd took a moment to settle down and rehydrated. 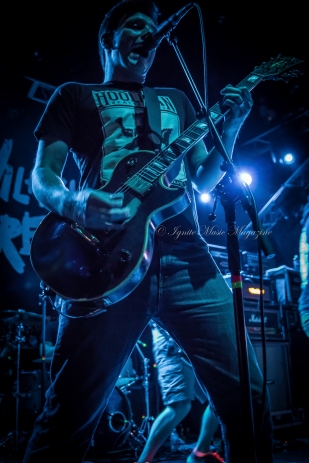 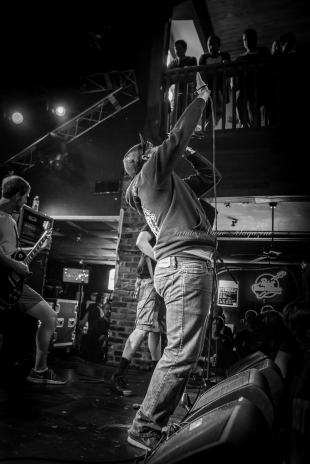 Photo by Matt Searles
Photos by Matt Searles
It didn’t take long as the crowd quickly began piling in for Pittsburgh PA’s political punkers Anti-Flag.
This was my first experience seeing them live, and they wasted no time firing up the crowd by opening up with one of their biggest hits “Turncoat.” 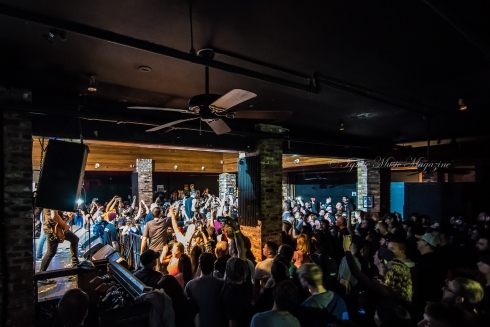 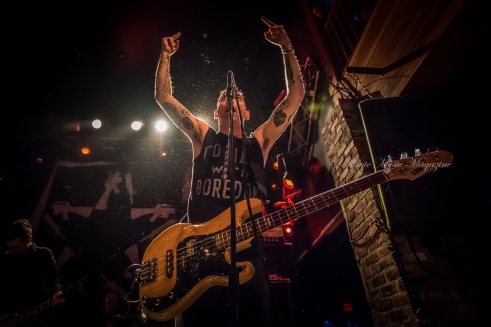 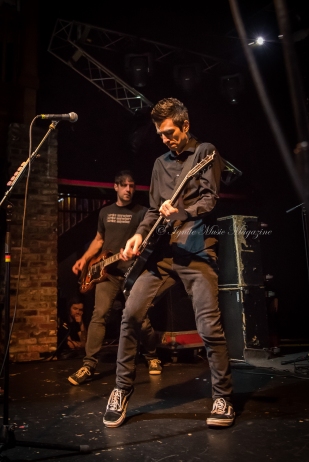 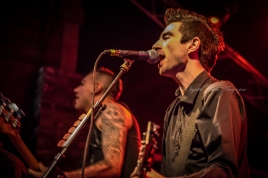 After a few songs in, the crowd was really going off when a fan made their way up on the stage and successfully stage dived back into the crowd. Security quickly grabbed the guy and was escorting him out. Singer Justin Sane stopped the band and told security not to kick him out ~ this really got the crowds attention. But nothing could have prepared me for what they did next that blew my mind. In my 20+ years of going to concerts, I have never seen what they were about to do. Bassist Chris Barker asked the crowd to clear a spot in the middle of the floor. They then took apart the drum set and put it in the open space on the floor.  Singer Justin Sane joined drummer Pat Thetic and played several songs right in the middle of the pit. It truly was an awe inspiring site to see in person.
You would’ve thought that would be the highlight of the night, but Pennywise soon reminded everyone why they were the headliner.
Pennywise is one of those bands that make you feel like they are playing each song just for you.
By the time Pennywise hit the stage, the crowd had filled Freebird to capacity.
I’ve been listening to Pennywise since the mid 90’s and have seen them live numerous times. Most recently in St. Augustine back in August for the Summer Nationals Tour with Bad Religion and Offspring. Previous to that, was when I had the opportunity to see them live at RiotFest Chicago in 2013, so it had been a while since I’d seen them headline a club show. 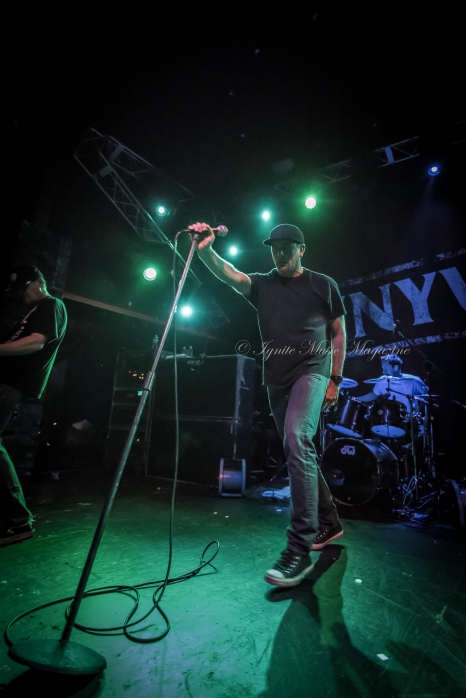 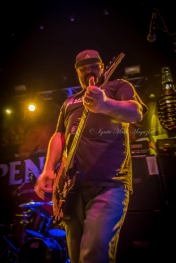 Needless to say, I was completely stoked for this show.
After 2 songs into their set, a fan yelled a request for “Fight Til You Die” so they asked the rest of the crowd if they wanted to hear them play it too. As expected, the crowd roared in agreeance. One thing you will always get at a Pennywise Show is a cover song or two, and this night was definitely no exception.
The singer from A Wilhelm Scream (Nuno Pereira) joined them onstage to sing “Minor Threat” by Minor Threat. Singer Jim Lindberg felt left out and wanted to do a cover of Black Flag’s “Gimmie Gimmie Gimmie.”
They also played their own rendition of Ben E. King’s “Stand By Me” and as a Pennywise tradition, they closed out their show with “Bro Hymn.”
All in all, I must say it was a great night; filled with old friends, new friends and of course Punk Rock!
Review by: Kevin Minatree.

1 Comment on Get The Punk Out !! Punkers PennyWise, Anti-Flag, A Wilhelm, and Locals Flag On Fire SLAMMED through Jacksonville !!