Click here for the entire series of Definitely Maybe - The Documentary
as it is released over the next week. 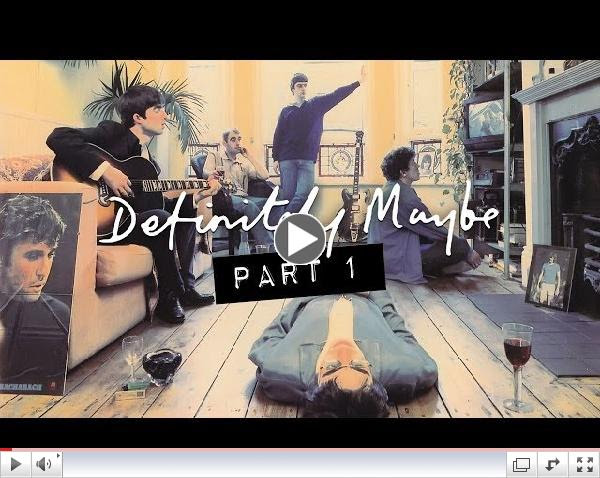 In their 14-year recording career Oasis sold over 70 million albums worldwide, had 22 consecutive UK Top 10 singles, 7 No.1 studio albums, but, more than that, they helped define a generation. Now Big Brother Recordings are to reissue the band's classic albums in chronological order as part of the new Chasing The Sun series. Each album has been remastered and available with rare and exclusive bonus content.With 2014 marking the 20th anniversary of its original release, Definitely Maybe will be the first release in the series, out 19 May. (What's The Story?) Morning Glory and Be Here Now will follow later this year.   Also available to order now from www.oasisinet.com on cassette for a limited period only isOriginal 1993 Demos, a replica of the legendary demo cassette handed out by the band before Oasis were signed. An incredibly rare rock artifact - only 8 copies were made in its original form -Definitely Maybe producer Mark Coyle has written new sleeve notes for this release.   Additionally, especially for Record Store Day on Saturday April 19th, Big Brother released a limited edition remastered replica of Oasis's debut 12 inch single Supersonic on heavyweight vinyl.   INgrooves Music Group is handling the distribution in the U.S., with its artist services division INresidence overseeing marketing for the catalog. Definitely Maybe: Chasing The Sun Edition Definitely Maybe was originally released in August 1994 and was an immediate critical and commercial smash. The fastest selling debut album ever (at the time), it went seven-times platinum in the UK (over 2 million copies), and sold 5 million worldwide. Containing the classic debut single Supersonic, and subsequent singles Shakermaker, Live Forever, and Cigarettes & Alcohol, Definitely Maybe frequently appears on 'best album of all time' polls, including being listed as one of Rolling Stone's 100 Best Debut Albums of All Time and a No.1 placing in a 2008 Q Magazine/HMV poll of the 'Greatest British Albums.' Every brand new edition includes a remastered version of the original album. The deluxe CD and super deluxe box set include two CDs including all the B-sides plus rare and unreleased Oasis tracks from the Definitely Maybe era, plus their huge Christmas single from 1994, Whatever. All editions come with new sleevenotes by respected rock critic Neil McCormick. Highlights of the bonus content include Previously unheard live acoustic versions of Live Forever and Shakermaker from a Paris instore gig around the time of the release of Definitely Maybe Half The World Away (Live, Tokyo Hotel Room): an early and intimate version of this Oasis classic, recorded in Noel's Gallagher's hotel room in Toyko in 1994 by Mark Coyle Strange Thing (Demo) from the Original 1993 Demos cassette Sad Song (Live at Manchester Academy) a previously unheard recording Whatever (Strings): recorded on a portable cassette machine at Maison Rouge Studios by Mark Coil